I recently told a student in Classroom Three that I had attended Rivendell School when I was a little girl and was met with a look of utter shock and glee: “You?!” she cried, “You went here? To Rivendell?” Her excitement was both because of the awe-inspiring reminder that even grown-ups were once little, but it was also recognition that she and I shared this special experience of being a friend at Rivendell. She scurried around our classroom, telling friends the news she had learned and reassuring them that she was indeed right, and when their eyes inevitably shifted to me for confirmation, I’d nod, letting them in on my little secret. Because it is, in fact, true!

Just like the parents of all the friends who stared at me wide eyed over this big news, my parents made the decision to send me to Rivendell School, at that time called The Children’s House, located on 7th street, and later decided to send my younger brother there as well. They felt that their daughter would be treated as someone who could learn so much, yet simultaneously someone who could be learned from. They valued that their daughter would be taught not just the rules that exist at school, but also the reasons for these rules.

Just like the children I have the privilege of spending my days with, my time at Rivendell was marked by a period of intense learning and growth. I learned to be a friend to people I am still deeply close with today, I learned to be a part of a group, to share and negotiate and compromise, but most importantly I learned about myself, about what I wanted and how to ask for it, slowly starting to become my very own person.

I never quite realized what an impact my time at Rivendell had on me until I journeyed back to Rivendell in the Summer of 2018, after the opportunity arose to work in Summer School. The jitters that come with beginning a new job lasted only until I stepped foot inside the door. Even in an unfamiliar building, I felt this sense of warmth that I can only equate to coming back home after a long time away. I am not sure what about it was so instantly comforting and familiar – perhaps it was the physical aspects of the school, like the rugs I encountered in Classroom Four that I instantly remembered having rolled out in my own classroom to “do a work,” or when I realized the candlestick holder we use for birthdays is the exact same one I had seen in a photo of Shelly and me blowing out the candle at one of my Rivendell birthdays. Or perhaps it was something less literal, like the feeling I got from the teachers around me that no challenge was too challenging, no idiosyncrasies too idiosyncratic.

And now here I am back again, no longer a student but an Assistant Teacher, yet I am struck by the idea that my return to this home is marked by yet another period of intense learning and growth. Furthermore (and this is almost too cyclical for me to wrap my head around), now the people who supported my growth when I was little are doing it all over again. Katy, Shelly, Jane and Lissy (to name just a few) were a part of my Rivendell experience then and are now my teachers again.

There is something magical about being back here. I am proud to be here because in the same way that my Rivendell education has shaped me into who I am today, every day I see it shaping the children in Classroom Three. As we roll out rugs to “do a work” together, I feel privileged to watch these children learn and grow, but also feel lucky that I get to simultaneously learn from them.

by Angela Carola, Rivendell Board of Trustees

There are a number of ways we can stay connected to fellow alumni parents and the mission of the school:

Rivendell Alumni parents often share anecdotes about the small interactions they see their grade school or even teenage children have with others, and how those interactions would look different if not for the perspective they gained at Rivendell. We can all agree supporting the spirit and mission of the school will help Rivendell thrive. Your continued involvement is paramount to making sure that happens. 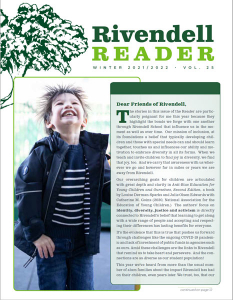